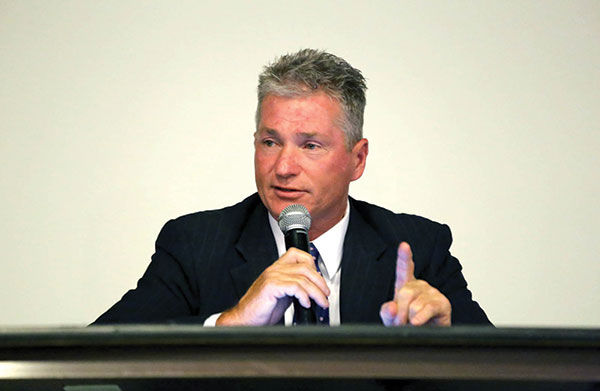 In September, The Chief reported that Steve Cassidy, the long-time head of the Uniformed Firefighters Association, was stepping down to take a newly created position as executive director of the Fire Pension Fund. James Slevin, the UFA’s vice president for the past 14 years, will serve the remainder of Cassidy’s term, which runs to April 30, 2017.

Mr. Cassidy was an FDNY firefighter for 15 years at Engine 236 in East New York, Brooklyn. He gained prominence upon his election as union chief in spring of 2002 while the FDNY was still recovering from the devastating losses of September 11, 2001. From 2006 to 2011, Mr. Cassidy served on the National Advisory Council of the U.S. Department of Homeland Security. On appointment from Pres. George W. Bush, he also served a four-year term on the Medal of Valor Review Board. Mr. Cassidy’s departure comes on the heels of a significant achievement for his union’s membership, as Governor Cuomo recently “signed into law a bill giving Firefighters hired after 2009 the same disability-pension benefit as more-senior colleagues.”

Mr. Cassidy already has experience with the Fire Pension Fund, where he has served as lead trustee and vice-chairman on the FDNY Pension and Investment boards. He has also served as treasurer of the New York City Municipal Labor Committee, covering all New York City municipal unions. He has been vice president and executive board member of the NYC Central Labor Council, a coalition of more than 300 unions representing 1.3 million workers. Mr. Cassidy has served as chairman of the UFA’s Widows’ and Children’s Fund, which benefits families of FDNY firefighters killed in the line of duty, and is on the board of directors of the Thomas R. Elsasser Fund, benefiting families of FDNY firefighters who died in non-line-of-duty incidents.

Fire Commissioner Daniel Nigro said that detaching the pension fund from the FDNY will save the department about $2.3 million per year in administrative costs.

We wish Mr. Cassidy well in his new position.

Barasch & McGarry represents injured firefighters, police, and EMTs in a variety of personal injury cases. Call us today at [ln::phone] or contact us online to schedule a free consultation.