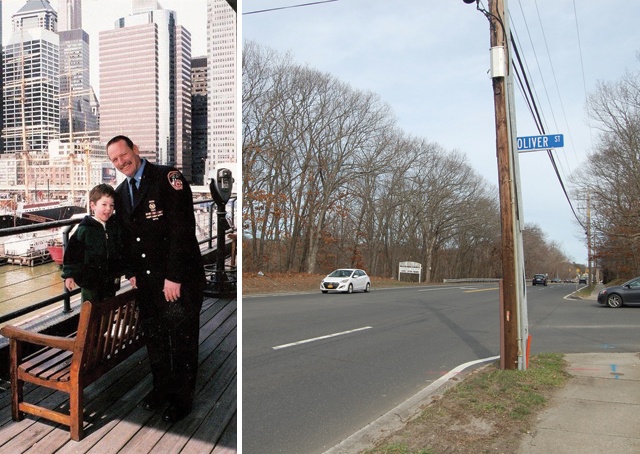 Bill Esposito, a retired FDNY firefighter, with his son Billy, now 19. The accident occurred at Route 58 and Oliver Street on March 9.

The Suffolk Times recently reported that retired FDNY firefighter Bill Esposito suffered serious injuries on March 9 when a Ford sedan, driven by an unlicensed and uninsured driver, cut across the path of his motorcycle, causing a collision that launched the 60-year-old rider 30 feet through the air and onto the pavement of Route 58 in Riverhead. A 24-year-old gas station attendant heard the crash and immediately rushed to the scene, while calling 911 through a Bluetooth headpiece. A medevac transported Esposito to Stony Brook University Hospital within 40 minutes of the crash, where he was assessed with grave, life-altering injuries.

If we total the maximum of each penalty, the driver could face 15 days in jail and about $2700 in fines. Meanwhile, the victim is in a long-term-care rehab facility with multiple fractures throughout his body, including what hospital officials termed the “worst fractured pelvis they’ve ever seen.” Injuries of this magnitude cry out for compensation, but despite security video of the accident that could prove liability, the unlicensed and uninsured driver will likely not be held accountable. When he broke the law by driving without insurance, this driver decided to deny potential future victims any monetary recovery for their injuries.

This tragedy points out the urgent need for authorities to face the crisis of uninsured motorists driving in New York State. The Suffolk Times cited data from the New York Department of Motor Vehicles from 2011 to 2013 that sets annual citations for driving without insurance at crash sites at almost 3,000. The time has come for greater criminal penalties for drivers who flout the law and evade responsibility for the harm they cause.

Barasch & McGarry represents injured firefighters, police, EMTs and civilians in a variety of personal injury scenarios. Call us today at [ln::phone] or contact us online to schedule a free consultation.

Barasch McGarry Salzman & Penson do great work for firefighters. Free wills for active members and making sure the injured are protected. Here is Bill Esposito’s GO FUND ME SITE. https://www.gofundme.com/8dxusffw